A new political generation has arrived: the millennials. Joel Kotkin, in a recent commentary, stated, “A Pew poll finds that 43 percent of millennials have positive connotations about the word “socialism…” So, we are seeing the embrace of an openly socialist septuagenarian by a generation that, within a decade, will dominate our electorate and outnumber baby boomers as soon as 2020.”

As soon as the feeling returns to your fingertips, I want you to reach out to every college student you know. Tell them to text, Tweet, Snapchat or YikYak (it’s a thing – look it up) anyone they know at a state university in Illinois to ask them how big, liberal government is working out for them.

It might be hard. A lot of the kids they used to know at Illinois state colleges aren’t attending anymore because their MAP Grant funding just got cut. After over a decade of exclusively liberal rule and wanton government spending, the state’s ability to pay its bills and balance its budget has deteriorated.

Thanks to the “progressive” leadership of the past decade, the future of the state’s public universities, a door to upward mobility for tens of thousands of teens every year, is threatened.

State universities have lost students in droves because of a shrinking pool of high school graduates and competition from cheaper-tuition schools across the state line. Since 2009, according to the State Higher Education Executive Officers Association, the system has suffered the steepest enrollment plunge (17.8 percent) by a wide margin among the 50 states.

State universities are held hostage by the state’s credit rating and its threat of higher borrowing costs. Their costs are driven even higher because of the many problems that plague state government. Illinois spends over $12,000 per full-time equivalent student, while the national average is around $6,500. At the same time, tuition is 30 to 60 percent higher for Illinois’ public universities when compared to universities in neighboring states.

Additionally, the state pays more per student and students are paying more in tuition, because the cost of providing an education in Illinois is so high. Higher minimum wages, prevailing wage requirements, collective bargaining, unfunded mandates, exorbitant pension costs, and workers compensation all drive up the cost of education.

That is what big government policies do: they create layers and layers of bureaucracy, foster waste and abuse, and offset the critical balance between the people who are served by government and the people who fund government. And, right now, there is not a Safe Space left that can protect Illinois college students from that reality.

In this progressive mess, however, there is a ray of hope. A Reason.com study found that when different economic systems were described to them, 64 percent of millennials identified the best system as being a free enterprise system. 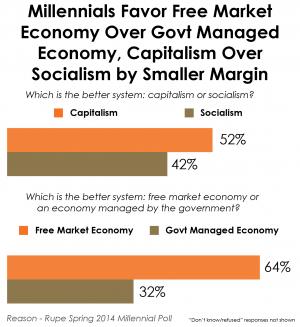 The study concluded that while millennials like the market-based economic system in principle, they aren’t sure if it’s the best way to improve their lives. Born into the worst economic recession since the Great Depression, young voters have not experienced or observed market-based success. For that reason, government action appears to be a viable alternative to improving their quality of life.

Illinois’ higher education system provides a poignant and instructive “bad example.” But if Republicans and Libertarians are to remain relevant to the next generation then our challenge is to make an authentic and compelling case for free markets. We have to introduce the next generation to the optimism that is born of the only economic system in the world that has ever lifted 1 billion people out of poverty and improved standards of living globally.

This will be a significant effort. But it is necessary. The party that figures out how to tap millennials’ energy, and overcome the challenges of reaching them, can bring a large and powerful group of Americans into their coalition.